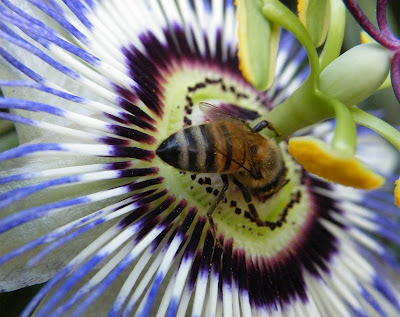 Imagine playing around with photography over the years, entering what you think is a rather unique shot in a Bing Earth Day photo contest, and winning over 17,000 entries. Just in time for Earth Day this year, that photographer, Alan Bosse, will be displaying his latest work at Second Story Gallery in Camas.

a show of Bosse’s macro photographs that includes the prize winner, will be unveiled at a reception during First Friday April 6 from 5 to 8 p.m. The exhibit will continue through Saturday, April 28, in the gallery upstairs in the Camas Public Library, 625 NE Fourth Ave. Earth Day 2012 is Sunday, April 22.

Bosse, a native of Rhodesia (now Zimbabwe), arrived in Camas last year after touring the world. He has visited 60 countries on all seven continents as a flight engineer doing relief work for the United Nations and other humanitarian organizations. He and wife Sharon found Camas following a trek through 48 states driving an 18-wheeler. He has settled into a downtown graphic design studio and says he especially likes the small town atmosphere, the exceptional library, Camas Produce for fresh food year-round, and the Farmer’s Market in the summer months.

Nature has always been Bosse’s focus as a photographer, he says, beginning as a young child when he collected “all sorts of insects, spiders, reptiles and any other living thing I could get my hands on.” He remembers he tried many times to get close-ups of his captured subjects before releasing them again. It wasn’t until 2008 that he bought his first camera designed to take macro photos, allowing him to get as close as half an inch away. Now, instead of trapping animals to get a closer look at them, he takes a really good close-up so he is able to study all the details.

Calling himself “painfully inquisitive” about how things work, Bosse said he loves solving problems and fixing things. The destruction of the natural world makes him look for alternatives as a way to protect the environment. “I have come to realize how beautiful all these creatures are and I have decided that Mother Nature is obviously the best artist and we are all trying in some way to emulate her,” he notes. ”My first love will always be nature and I see many opportunities to combine photography, nature and graphic design,” he adds. “I will always aspire to showcase the beauty of nature in the work I do.”

Is it a coincidence that this nature photographer from southern Africa traveled the world to find Camas to display his work on Earth Day 2012? Maybe. But Earth Day 2012 provides a wonderful opportunity to see prize-winning photos of nature by Alan Bosse, who once lived in South Africa and now calls Camas home.