What do you get when you combine unretouched photography with the twists and turns of fiber on the walls?
At Second Story Gallery in August you’ll get an emphasis on the natural world, when photographer Mike Ladage hangs his work side-by-side with mixed media artist Cathy Sholes-Tropple.  The two, who have never met, are displaying their distinctive pieces in a show Aug. 2 through 31 in the gallery located inside the Camas Public Library. 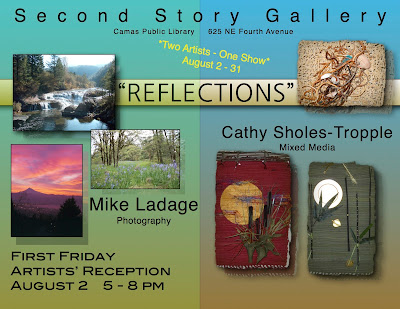 Sharing a love of nature, photographer Ladage and artist Sholes-Tropple will have their work unveiled at a reception that is part of First Friday in downtown Camas.  The free event in the gallery, where the two will get to know each other and introduce their work to the public, runs from 5 to 8 p.m. Aug. 2.

Sholes-Tropple is a Vancouver resident who has spent years working in oils and watercolor.  She said her multi-media art developed later because of her collections of shells and rocks, and the moss and twigs she picks up wherever she goes.  After discovering some colorful yarns in a coastal yarn shop, she realized she’d found a home for her treasures by creating background textures and fastening them into place.  She says she intentionally keeps her wall hangings rough around the borders as they would be in the natural world, spilling over the edges of the framework.

Washougal photographer Ladage began shooting pictures of his children playing sports, which led to freelance sports photography for the Post Record in Camas.  His interest in landscapes eventually had him turning his pictures into postcards, calendars and greeting cards of the local area that have been for sale in shops around the region.

“I am amazed when someone asks me where a certain photo was taken and when I tell them . . . they say they drive by that area all the time and have never noticed it,” Ladage said.

The show” Reflections,“ will be open to the public during regular library hours, 10 a.m. to 8 p.m. Monday through Wednesday, 10 a.m. to 6 p.m. Thursday through Saturday.