Something Fishy is Going On 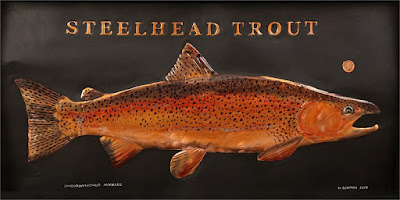 Camas resident David Gerton says that even though he’s into “this stuff some call 'art,' " he doesn’t like to call himself an 'artist'.”   Maybe fisherman is more like it.  Gerton creates lifelike, life-sized models from the animal kingdom, most often of native fish.  His reproductions glow against black backgrounds, as if a salmon has just been caught in a flash of sunlight penetrating the darkness of a deep pool.  “Something Fishy Is Going On,” an exhibit of Gerton's copper foil creations, will be on display at Second Story Gallery through January.

Gerton is modest about the sideline he has created, a skill that involves hammering foil--about twice as thick as kitchen wrap--into three-dimensional sculptures that have depth and natural colorations.  He uses patinas, transparent inks, washes and a small blow torch  to achieve a result that looks like each fish has been reeled in, dripping, from the water.

Because the thin foil is not supported by a mold that most embossers rely on, Gerton mounts his work under glass on stark black backgrounds so that the salmon, other game fish and a turtle or two, resemble trophies from a lifetime of fishing trips.  Gerton says his goal is to create works, specifically fish, animals and other things found in nature, which are beautiful and bring back memories for those who are viewing his creations.  "I've had people ask if I caught the fish, not knowing that it's made of copper," he recounts.   He admits he's a fisherman in real life but tends to release the wild varieties. 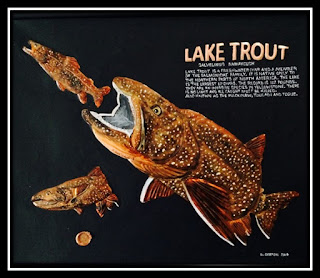 He has devised a trick or two to achieve lifelike qualities and once in a while he turns to his imagination.  "Look for the Double Rainbow Trout in the show," he says.  "It never existed but it looks cool,"  and he adds there is some tongue-in-cheek verbiage to go along with it.
As President and CEO of a Tualatin lighting design firm,  Gerton says he hesitates to call himself an artist.  “I reserve the term ‘artist’ for those people who are truly recognized as talented,” he says, acknowledging no formal training beyond a third grade art class taught by Miss Brandt in 1952.

Gerton’s art--as anyone who has seen it will certainly call it--is the feature of an unusual two-month exhibit at Second Story Gallery, aimed at the holiday shopping season.  The mounted trophies are meant to appeal to those who can't stop talking about the one that got away.

A highlight of First Friday at Second Story Gallery will be holiday music performed by Oregon Symphony violinist Clarisse Atcherson. She will be joined by Lucia Atkinson and Amber Gold, also on violin.

Atcherson is the wife of featured artist David Gerton, who will be unveiling his work in a show called "Something Fishy is Going On." Gerton creates lifelike game fish and other animals from thin sheets of copper he hammers and colors.

Musician Atcherson and artist Gerton have lived in Camas eight years, although she has been playing with the Oregon Symphony as well as teaching violin for much longer. Gerton's show of brilliant species will continue in the Gallery through Jan. 30, 2016.

If you haven't seen the David Gerton exhibit yet it is well worth the trip to the Second Story Gallery to see these unique pieces of art.

The Columbian featured this artist in a December 4th article - check out the In the News section to the right for the link.

Just in time for a holiday purchase, artist David Gerton is marking down the price tags on his lifelike fish decorating Second Story Gallery.  Prices are currently 15 to 20 percent lower than at the shows unveiling, according to Gerton.