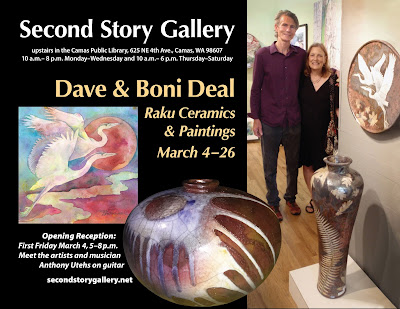 If you could see heat, this would be where you would find it.  The ceramic creations of Dave and Boni Deal are fired in a 2000°F kiln, then immediately plunged into a barrel of fir boughs and other organic materials.  The high heat, rapid cooling, and flames and smoke throughout the process are what give the Deals’ raku pieces their beautiful crackled glaze and metallic accents.


Dave and Boni tell us they work together on their pottery, an art they've been pursuing for 40 years.  Dave focuses on forming clay at the potter’s wheel, glazing and firing,  and says he likes the challenge of fine-tuning his pieces.  Boni draws surface imagery and does “a lot of behind-the-scenes jobs,” she says with a smile.  She also paints with acrylics in a water-color style, made to harmonize with the pottery.


In addition, the couple has invented “batik raku” bowls decorated with a technique Boni developed after experimenting with batik on fabric. These bowls are created with wax and glazes applied in intricate patterns and then raku-fired. They can be used for holding dry items and for decorative art; they can hold liquids only with a liner.

The Camas couple, known throughout the country for their pottery style, will bring 30 pieces to Second Story Gallery in March for their first large exhibit in several years in their hometown.  The Deals will be on hand for a public reception as part of First Friday in Downtown Camas from 5 to 8 p.m. March 4 in the gallery, upstairs in the Camas Public Library.

This March show, titled “Dave and Boni Deal: Raku Ceramics and Paintings,” will reflect Pacific Northwest imagery, according to Boni.  It ranges from the small batik bowls to triptychs and platters and a large “Egret Ewer” over four feet high.


Dave and Boni have worked full-time in the ceramic arts since their student days, raising their three kids on the property where they operate their studio.   They sell selected pieces at Camas Art Gallery and in addition, their work is permanently on display at the Camas Public Library where they were commissioned  to create a clay Mt. Hood scene as part of the 2003 building renovation.  Their art is in public and private collections throughout the world and is known for its large classical forms and intricate surface design.

Those who know them and collect their work know the Deals live and work without electricity to fire that earthen kiln.   Boni says they’re inspired by the local environment which they access from their mountainside property.  "We like to hike in the Gorge, and our Camas area home and workshop are in the woods and off the grid, so we use nature themes like native plants and wildlife --- God’s creations,” she says.

The Deals’ creative process was filmed for public broadcasting's “Oregon Art Beat” and  can be seen online at opb.org/television/programs/artbeat/segment/dave-boni-deal/   More information about the artists and the gallery can be found at yellowleaf.org/raku and secondstorygallery.net


FIRST FRIDAY ARTIST'S RECEPTION - MARCH 4   5 - 8 PM
UPSTAIRS IN THE CAMAS PUBLIC LIBRARY
Music provided by Anthony Utehs on guitar.
The show will run through March 26 and is open during the library's regular hours,  10 a.m. to 8 p.m. Monday through Wednesday, 10 a.m. to 6 p.m. Thursday through Saturday.