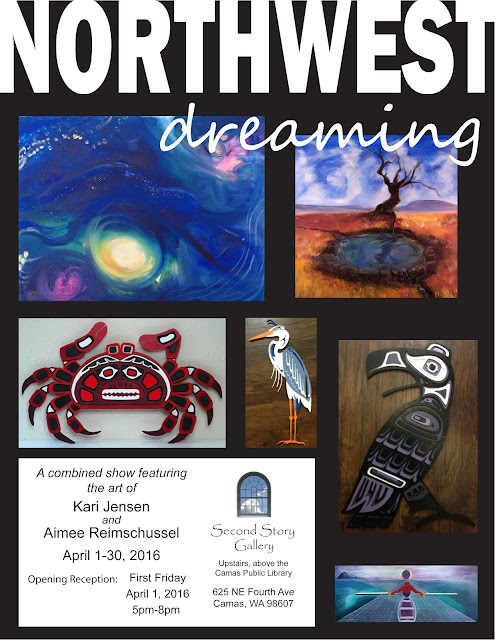 This month’s show at the Second Story Gallery features two women who started out early as artists and whose works, though very different in style, illustrate similar themes of Pacific Northwest nature and myths.

Kari Jensen will exhibit acrylic paintings of birds, trees and other images from nature with a hint of magical realism, while
Aimee Reimschussel will be presenting examples of her unique totemic cut-out images of fish, birds and other animals of the Pacific Northwest.


Kari’s art is rooted in story, myth and spiritual connections to the natural world. You will see birds in her art. “Birds play a big role in many stories, and in this migratory area, they can't help but be an inspiration for visual artists,” she explains.  She uses the term “magical realism” to describe her work because, although her images are drawn from the “real world,” they are not purely realistic. “My desire is to capture moments of realization, subtle epiphanies.”

Kari says she slipped into her role as an artist “pretty much from Day One,” giving up a short-lived pre-school goal of becoming a dentist.  She spent time in the theater, studying theater design, animation and history at UCLA. Her artistic career has included painting and sculpting at Walt Disney, Warner Brothers, and Don Bluth’s animation studio.  A resident of Camas, she is currently repairing the Crown Park spring toys and she hopes to design some new play structures in the near future.


Aimee’s classical artistic education was part of a bachelor’s degree in chemistry, art and English from Weber State University in Ogden, Utah.Her first sales were cut-paper cards featuring Utah landscapes in a local gallery gift shop. Her range grew to include larger cut paper works that exhibited in a small gallery in San Angelo, Texas, and then sent to auction for charity in Ogden, in 2003.  In 2005, her entry in the national Fiskars "Ready, Set, Craft!" competition earned her a trip to Chicago where she placed fourth nationally.


Aimee’s interests changed in part when her second child, born in 2007, was diagnosed with autism, resulting in the need for therapy. She moved to the Pacific Northwest in 2007 and fell in love with the environment. She says it’s the inspiration for her wall art which has won national, state, and local awards.

“Northwest Dreaming” continues through April 30, where it can be viewed during regular library hours, 10 a.m. to 8 p.m. Monday through Wednesday, 10 a.m. to 6 p.m. Thursday through Saturday.