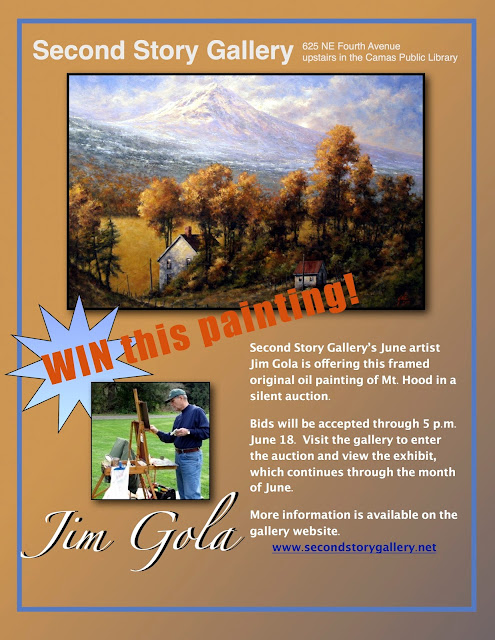 Only a few more days….

The auction for an original oil painting at Second Story Gallery will end at 5 p.m. June 18.  All bids must be received at the silent auction site, inside the gallery in the Camas Public Library, 625 NE 4th Ave.

Artist Jim Gola painted the large scene of Mount Hood in autumn tones and will donate the auction price to the volunteer art gallery.  The framed work of art is on view at the top of the stairs at the Camas Public Library, allowing art lovers the chance to visit and bid multiple times on the masterpiece.

At the close of the auction June 18, Gallery board president Joel Emanuel will confirm and contact the highest bidder so you do not need to be present to win.  Meanwhile, the full exhibit of Gola’s work, titled Some Things Old, Some Things New, will remain on view through June 29. 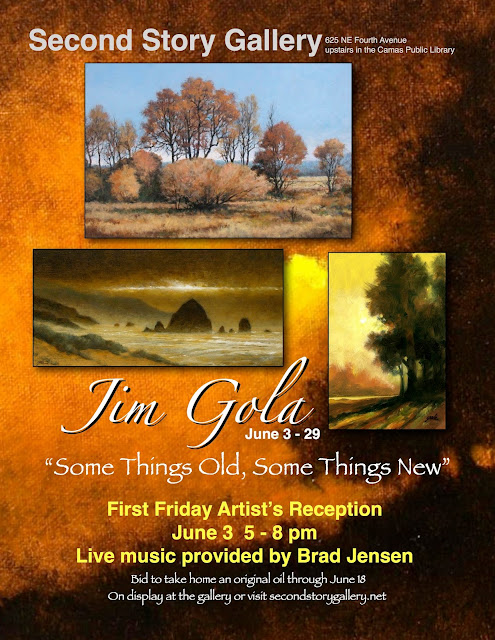 June’s Artist Will Present a Decade of Oil Painting

“Some Things Old, Some Things New” is a theme that captures the exhibit at Second Story Gallery in June. Artist Jim Gola will label each of his 30-some landscapes with the date it was painted over the last ten years, hoping viewers will enjoy watching the progression in his art.  He says a good eye will see subtle but distinctive improvements (in his view at least) in his technique, composition and handling of color.
“Many artists who have lived for nearly eight decades as I have,” Gola notes, “are either purchasing a more comfortable easy chair or taking a longer nap than usual.”  He admits to the latter but says he tries to keep current by staying involved with the local art community, especially with “my younger generation of artist friends who have like-minded artistic tastes.”  He is a founding member of the Northwest Oil Painters Guild, based in Vancouver.

Gola will be on hand to explain his retrospective at the First Friday reception that unveils his show June 3 from 5 to 8 p.m. in the Gallery.  Also on display will be an original oil of Mount Hood created by Gola that will be the centerpiece of a silent auction.  The artist is donating all proceeds to Second Story Gallery when the auction closes at 5 p.m. Saturday, June 18.

Gola’s oil painting style borrows from the early 20th century, no surprise since he says he’s an admirer of two of that era’s most famous landscape artists, George Inness and Thomas Moran.  But it was discovering the still lifes of another traditionalist Michael William Harnett, as a 15-year-old youngster in Philadelphia that led Gola to pick up a brush and start painting in oils while still a teenager.  He finds it ironic that Inness, with his landscapes, didn’t get along with Harnett and his still lifes.  “Regardless of their feelings for each other,” he says, “I hope a little of each of them has rubbed off on me.” Gola says he doesn’t believe in self-taught artists.  With one year of night school in commercial illustration, he credits studying the original paintings of “the Masters” as the basis for what he calls his most formal schooling.  “From Giotto to Picasso, there is always more to learn for the inquisitive artist or art lover,” according to Gola, who retired to Woodland after a career as a designer of custom homes.  As he nears the age of 80, the painter says he hopes his Camas show will be an encouragement to fellow artists of his generation to  "Keep on keeping on.”  He adds, “May the hands holding the brushes continue to follow the heart as well as the head.”

Gola’s show, “Some Things Old, Some Things New,” will remain on display through June 29 in the gallery, upstairs in the Camas Public Library.  The First Friday reception for the artist, part of the Downtown Camas Association activities, will feature live music by Brad Jensen.