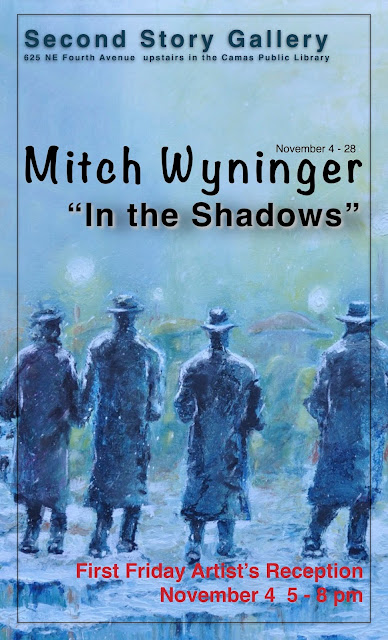 Painter Mitch Wyninger presents “In the Shadows”
at Second Story Gallery in November. 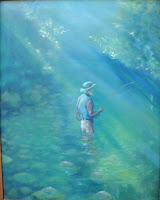 The work is predominantly in oil and ranges from dramatic subjects to the more traditional, says the artist. Wyninger admits he often depicts a somber mood in his work but he points out that it’s broken up by the use of bright colors and light.  "In the Shadows" seems like where the work started, but it's moving into the spotlight. 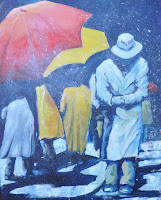 Wyninger calls his style impressionistic and says he takes inspiration from vintage images.  Often depicting lone men with hats pulled down, he sometimes places them in a city crowd but sometimes in a trout stream.  The mood shifts from the Depression Era to serenity with a shift of color and light. 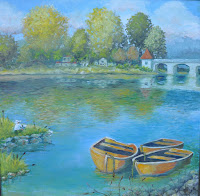 The local artist is stepping out of the shadows himself, in a way.  He has spent his career as a landscape designer and horticulturist, involved in art but only finding the time to focus on his painting since retirement.  This is the third exhibit where his painting is featured and he says he is pleased to show his work again to the local community.  He is a 20-year resident of Washougal.

The artist will be in the spotlight at a reception November 4 from 5 to 8 p.m. during First Friday in downtown Camas. 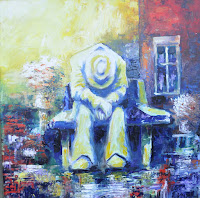 Wyninger’s show continues through Nov. 28 at the Gallery, upstairs in the Camas Public Library.  It's is free and open to the public during regular library hours for the remainder of the month.