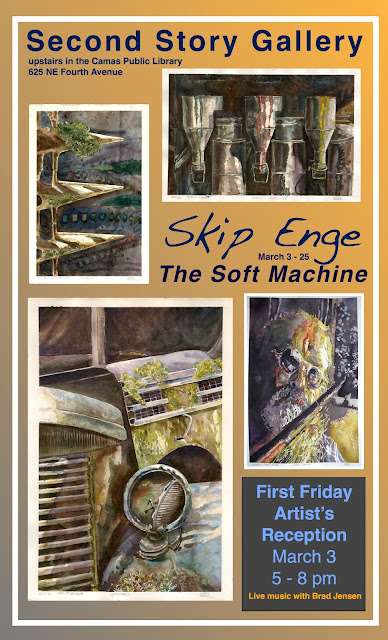 Skip Enge says he knew from an early age that art is what drives him.  The Camas native unveiled his first show just three years after high school and calculates he has filled 40 one-man exhibits in the past 40 years. Make that 41.  Enge will show watercolors with an industrial edge at Second Story Gallery in March.  His show, "The Soft Machine," opens with a reception for the artist on First Friday March 3, from 5 to 8 p.m. in the Gallery.


Keyboardist Brad Jensen will be providing music for the evening. 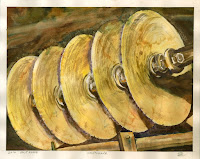 Enge explains "The Soft Machine" is another name for the human body and the main theme of a William Burroughs' book of the same title that concerns how control mechanisms invade the body.  There is an appendix in the 1968 British edition that makes this connection, he says, and Enge's paintings have a mid-century feel as well.  The subdued colors and industrial themes seem connected to a time when men and machines worked without electronic interface.

If Enge's new show looks like he just stepped out of a paper mill, the Camas mill is in fact a place where he found employment to save money for college.  But he says his work varies in approach, technique and symbolism.  "As a poet I see analogy in most things I think about and write about.  My personal painting style changes all the time . . . sometimes literal and other times fanciful."

Recently returned to his hometown, Enge is collaborating with the art department at Washougal High School on lessons for the classroom.  His commissioned pieces are in collections across the country and locally at the Oregon Historical Society and PeaceHealth Medical Center. 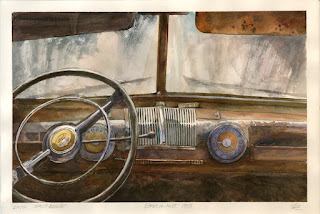 Enge says he has centered his life around creativity.  He has worked as a museum exhibit designer, graphic designer, fabricator and "creator of solutions" for museums and collections, all while painting in his extra hours.  He also writes poetry, often while he's painting, so a few poems will be exhibited alongside his watercolors to serve as his artist's statement.