"From Our Point of View" 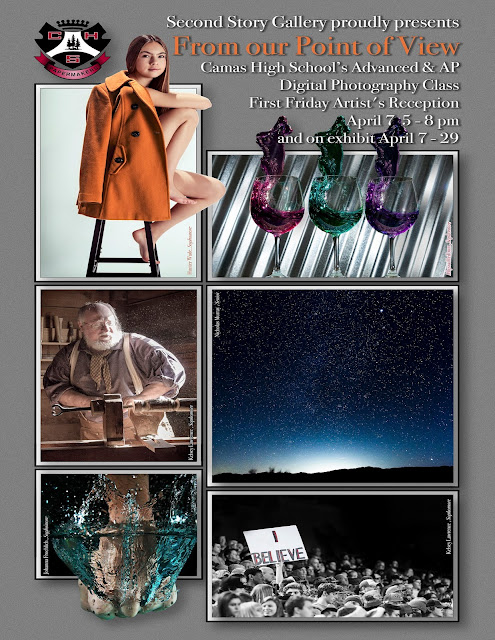 Photography by students from Camas High School takes over Second Story Gallery during the month of April. Titled “From Our Point of View,” the work includes character portraits, action shots and art photos as sophisticated as any found in a glossy magazine spread. These advanced students of teacher Doug Huegli will cap their spring break by attending an opening reception in their honor during First Friday, April 7, from 5 to 8 p.m.

According to Huegli, digital photography courses were added to film photography at the high school 13 years ago. With the opening of the new high school the next year, film photography went by the wayside and his digital classes have expanded from 16 students to the current 131. More than 1000 have passed through the classes, drawn from every grade level.

Returning students sign up for Advanced Photo and a few pursue advanced placement in photography, where they can meet criteria for higher education in the field. These young photographers, drawn from both the advanced class and advanced placement, are the ones taking part in the Second Story Gallery show. They include Trevor Gjerswold, Allyssa Heilbrun, Kelsy Lawrence, Nicholas Murray, Alexis Royal, Hunter Wade, Matthew Williams, Johanna Froehlich and Clancy Morgan.

As Huegli points out, the Camas School District has a close connection to the community and Second Story Gallery, where other student art has had a turn. He notes that in the past 25 years, school programs and students have really put Camas on the map. “Sports have dominated those headlines and hype, but in the background, artistically and academically, Camas is so much stronger,” he says. “The creativity and caliber of our students builds year by year.”

The show will continue through April 29 in the gallery, upstairs in the Camas Public Library. It’s open to the public, with free admission, during regular library hours: 10 a.m. to 8 p.m. Monday through Wednesday, 10 a.m. to 6 p.m. Thursday through Saturday.