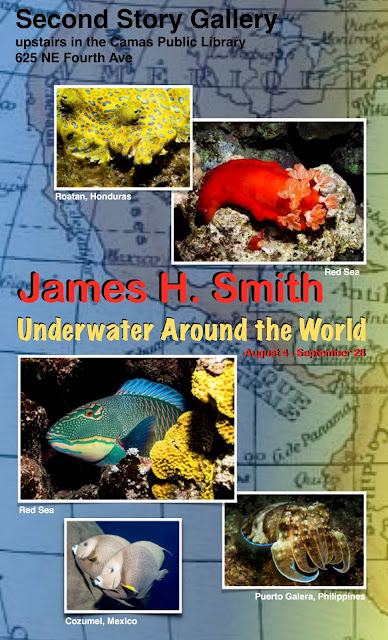 Photographer James H. Smith has always enjoyed nature photography but when he started scuba diving, a whole new world opened up.  Starting in 2009, he began diving and taking pictures in special places around the world.

The upcoming show at Second Story Gallery reveals some of what he sees under the waves.  In an attempt to wring the most out of the last days of summer, the warm-water show will span two months from Aug. 4 to Sept. 28.  Smith has collected images of sea creatures from many exotic dive spots and calls his show “Underwater Around the World.”  The photographer, whose home port is Vancouver, will be on hand to talk about his work at an opening reception during First Friday in downtown Camas, from 5 to 8 p.m. Aug. 4.

Smith says he had been diving for about a year when he acquired an underwater camera and his interest in this specialized photography took off.  “I was and continue to be amazed by the beauty and diversity of underwater life,” he says.  His skill with the extraordinary subject matter has led to publication in Dive Training Magazine and Underwater Photography.

Now he’s filling Second Story Gallery with photos taken in such diverse locales as the Red Sea, Cozumel and the Philippines.  The exhibit will include conventionally printed and framed pieces but also photographs printed on metal, which Smith says is particularly well-suited for the colors and details of underwater life.

Smith will unveil his photographs at August’s First Friday in the gallery, upstairs in the Camas Public Library.   The event is free and open to the public.  “Underwater Around the World” will continue through Sept. 28 during regular library hours, 10 a.m. to 8 p.m. Monday through Wednesday, 10 a.m. to 6 p.m. Thursday through Saturday.  It's located at 625 NE Fourth Ave. in Camas.