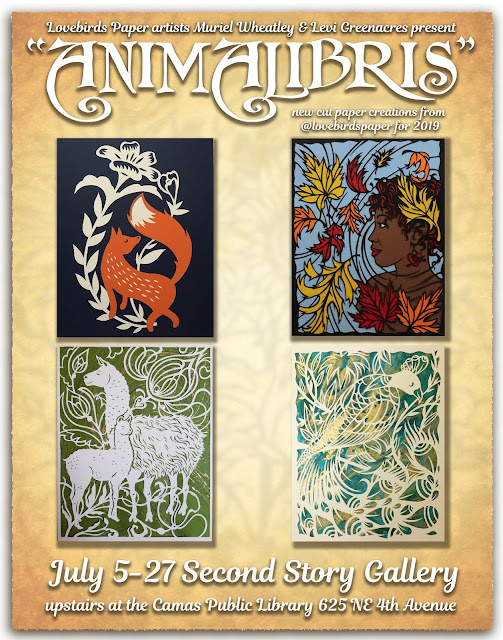 The Art of Paper Cutting Arrives at Second Story Gallery

There is an art to paper cutting as demonstrated by July’s show at Second Story Gallery. The designers behind each creation call themselves Lovebirds Paper, a duo made up of Muriel Wheatley and Levi Greenacres who happen to be . . ahem, lovebirds.

The whimsical art in July deserves a whimsical title: Animalibris. It's a mash-up named for the subjects, mostly animals, and their surroundings--the Camas Public Library.

The "Animalibris" show draws much of its focus from botanical and biological illustrations, capturing a number of creatures in their most playful environments according to the artists. The results are silhouettes, often layered with colors but with at least one of those layers carefully cut to reveal the others.

The two behind Lovebirds Paper have been collaborating on paper cuts since 2015. They say they draw from a wide variety of modern and historic inﬂuences, including Art Nouveau, screenprinting and woodcarving styles. Muriel Wheatley is a librarian and paper enthusiast who patiently cuts all of the designs by hand. Levi Greenacres, a Portland tattooer and children's book author, draws all of the Lovebirds designs.

Anamalibris opens with a First Friday reception for the artists from 5 to 8 p.m. July 5. Live music will be provided by Rob Lewis and refreshments will be served. The show remains in the gallery through July 27 and is available for viewing during regular library hours, 10 a.m. to 8 p.m. Monday through Wednesday, 10 a.m. to 6 p.m. Thursday through Saturday.